I thought I'd go totally independent and have a blog just for me. If you don't know me, I'm AJ Adams and I write dirty and dangerous romance. We've got bad boys from the Zeta cartel, the most violent and depraved organised crime organisation in the Americas, Belial’s Disciples, the biggest, nastiest MC in England and an assortment of sex slave buyers, marauding Beasts and other assorted villains from Prydain.

I'm writing all the time, but in the next few weeks I'll be promoting Beast, the first Prydain novel. If you like your men nasty and your sex dirty, you're going to love Rune. He's an evil bugger who has no problems with rape, pillage and plunder. As for Wynne, she is one of my favourite girls. Tough and with an evil sense of humour, she is the only person in Prydain willing to take on the Beast.... 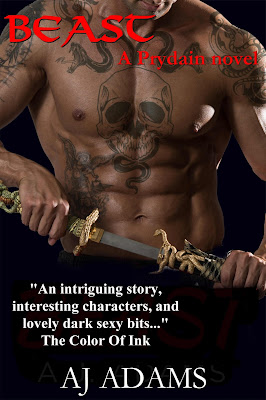 He stuck the knife in the ground and stripped off his leathers. The tunic came off, revealing a long, lean, muscled torso, covered in tattoos. Snakes ran up and down his arms, his pecs and his shoulders. A skull blazed on his chest.
Then he was pushing apart my legs, settling between my thighs, leaning over me. He smelled of smoke, leather and musk. It was terrifying, like being at the mercy of an animal.

Falsely accused, Wynne is determined to clear her name. However, a trip to petition the Steward at Brighthelme turns disastrous when the Beasts, fearsome warriors from the frozen north, raze the city. When Wynne is carried away, she’s determined to regain her freedom but Rune, her captor, has other ideas.

Beast is set in Prydain, an imaginary place that combines Anglo-Saxon England with Medieval England, the Teutonic Kingdom and the Viking Age. This story contains kidnapping, dubious consent and graphic violence. It is a standalone novel; no cliff-hangers. 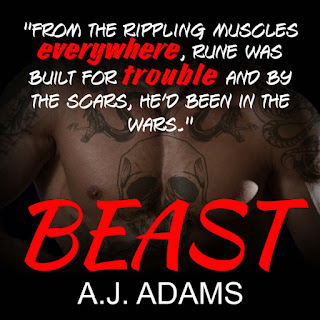 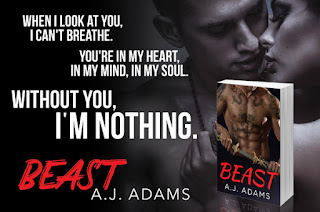 Buy Beast from Amazon, B&N, Google and other shops