Amazon Kindle Unlimited Encourages Piracy, And This Is How To Fix It

When I wrote about #cockygate making some new authors nervous about titling their books yesterday, I mentioned that the barriers put up by Amazon and other big book companies have led to widespread piracy.

This led to some questions - and accusations. Answering the latter first, I'm not anti-Amazon, anti-American etc etc. I was describing the situation as I see it.

I forgot that many people don't travel and have little idea of life outside the US/UK/EU.

We don't have a national library system; we're a developing nation. We do have bookshops.

Note: a latte in Starbucks/CoffeeBean costs RM12 or US$3 so for us, books are a luxury. Not everyone can afford them.

We see Amazon Kindle offers 1,400,000 books for RM40 or $10. They advertise everywhere: Facebook, Twitter, blogs are constantly harping on how wonderful KU is. It's also in newspapers and on television talk shows, dramas and news channels.

The message: KU is glorious.

We look at all the pretty toys, and we want them.

Problem: many of the best sellers listed on Amazon aren’t sold in shops here. And almost none of the KU books are available.

So we go to Amazon.

Fact: Amazon KU is available in 15 countries, meaning 180 countries get to look but not touch.

So we get angry.  We feel slighted, discriminated against, dissed.

And we keep seeing the shiny toys and we're told we're not allowed to play.

So when a shop opens up in the mall and offers us the top 200 best sellers at once, for half the price of a latte in Starbuck/CoffeeBean, we say, "Why not? We tried and they told us to f* off. So we'll f* them. Gimme, gimme, gimme!"

We don't care that the shop is owned by an organised crime syndicate because we're angry.

We don't consider that handing over tonnes of cash to criminals is a bad idea because we're getting our revenge.

So after a decade or more of raking in oodles of cash from ordinary people who'd normally never consort with criminals, the syndicates are so damn rich that they can bribe police, immigration officials, and god knows who else. Crime rockets.

Also, we've lost a little of ourselves because piracy has become normalised.

We know what's right, we want to do right, but we're locked out.

So, want to deal a death blow to piracy and organised crime?
Take our money.

It really is that simple.

Note: Barnes&Noble, iTunes, and other shops won't talk to us, either. Kobo will but the last two books I bought from them didn't show up in my reader, and they don't answer customer service email. As for Smashwords, ask me about them some other time.

Some book piracy facts
The Guardian thinks 4m or 17% of all online ebooks are pirated. Article here.
Russia puts book piracy at 25-30% - and people don't even realise they're buying illegal books! Article here.
Africa has a $1 billion dollar publishing industry, and it suffers hugely because of normalised piracy. Article here.

And now, as I said yesterday, I have a foothold left in Europe so I'm bloody lucky to be let into KU. So, I leave you with the usual SHAMELESS SELF PROMOTION!
(Note: if you're locked out, and you want to read my books, drop me a note, okay?)

Read my books FREE ON KU and tell your friends? 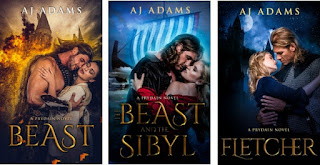 Read my books FREE ON KU. Really, you should!